Enjoy the latest in DC ceiling fans for amazing airflow coupled with exceptional energy efficiency. Our DC ceiling fans guarantee whisper-quiet operation, utilise high-quality polymer blades for effective and quiet air delivery, and use up to 50% less power than standard AC ceiling fans. A ceiling fan using a DC motor connects directly to the household electrical supply as well, however it does this via a DC motor controller. An additional electrical device that regulates the power supplied to the coils of the motor and uses pulse modulation to keep the motor turning. Essentially what this means is that it is not constantly driving the motor to spin, it does it with pulses of energy at intervals, this is how it consumes less energy than an AC-style motor. All DC ceiling fans include a remote control as standard, and can not be controlled via a wall control. Shop the latest in DC ceiling fans and enjoy powerful cooling for less. 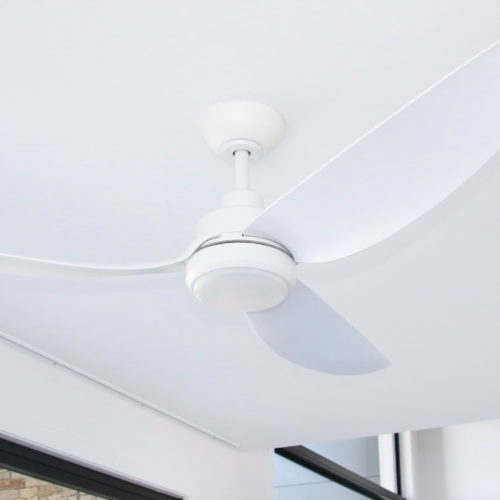 What size should your DC Ceiling Fan be?

Always ensure at least 50cm of space from the tip of any blade to any wall. Pay attention to high furniture or floor to ceiling wardrobes to make sure they won't reduce your fans performance.

How many blades is best for your DC Ceiling Fan?

The right colour for your ceiling fan depends on a few factors - your decor, your colour scheme and whether you want your ceiling fan to make a statement (contrast) or complement (match) your space.

Want to install your DC Ceiling Fan outdoors in your patio, verandah or alfresco area?

Enjoy the amazing Australian outdoor lifestyle in comfort by including a ceiling fan to help stay cool and keep the bugs away during our long summers.